Use Josh's Book as Part of Your Next Fundraiser


Non-profit charities and student groups can use The Gospel According to Josh: A 28-Year Gentile Bar Mitzvah as a fundraising tool for their mission or next event.

On orders of ten copies or more, pricing starts at $8 per copy and $12 per copy for autographed books. Email: josh@iampossibleproject.com for more details.

Now on the American Foundation for Suicide Prevention's recommended reading list for survivors of suicide.

By the time Josh Rivedal turned twenty-five, he thought he’d have the perfect life—a few years singing on Broadway, followed by a starring role in his own television show. After which, his getaway home in the Hamptons would be featured in Better Homes & Gardens, and his face would grace the cover of the National Enquirer as Bigfoot’s not-so-secret lover. Instead, his resume is filled with an assortment of minor league theatre and an appearance on The Maury Povich Show—a career sidetracked by his father’s suicide, a lawsuit from his mother over his inheritance, and a break-up with his long-term girlfriend. Tortured by his thoughts, he finds himself on the ledge of a fourth floor window, contemplating jumping out to inherit his familial legacy. In turn he must reach out to the only person who can help him before it’s too late. Based in part on his acclaimed one-man show, The Gospel According to Josh is a comedic and poignant true-to-life tale of love, loss, struggle, and survival—a gospel account of one young man’s passage into manhood—his twenty-eight-year Gentile bar mitzvah. 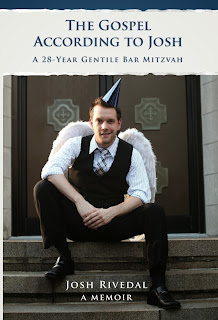 AUTHOR BIO
Joshua Rivedal is an actor, playwright, and international public speaker. He has spoken professionally about suicide prevention and mental health awareness in more than twenty-five U.S. states and two Canadian provinces. He serves on the board of directors for the New York City chapter of The American Foundation for Suicide Prevention. He wrote and developed the play, The Gospel According to Josh, which has toured extensively throughout the United States and Canada, and is set to open Off-Broadway in New York City in May, 2014. He wrote the libretto to a Spanish language Christmas musical Rescatando la Navidad. He writes for the blogs The Arts Entrepreneur and The BLOGospel According to Josh. As a voiceover actor, Josh has lent his voice to the role of Hippo in Scholastic’s Rabbit and Hippo In Three Short Tales, the narrator of Julianne Moore’s Freckleface Strawberry and the Dodgeball Bully, the narrator of Cinderella Penguin, and numerous other audiobooks and animated projects.

WHAT THEY'RE SAYING ABOUT THE BOOK


"Life doesn't come with a user guide. Instead, WE NEED SANE, FUNNY, INSIGHTFUL BOOKS LIKE THIS." -BRITISH COMEDIAN RORY BREMNER

"With the combination of theatrical wit, sarcasm and humor, raw emotions, familial turmoil, and heart-breaking honesty, Rivedal writes his story and takes his readers on an unforgettable and inspirational adventure. It’s a story of hope, love, and success that GUARANTEES TO INSPIRE MANY WHO BATTLE MENTAL ILLNESS or live in the shadow of it." -NATIONAL ALLIANCE ON MENTAL ILLNESS

"Josh writes with such humour, insight and courage that his book is a must read. No matter who you are, read it … I have been there with the black dog … I HAVE NEVER RECEIVED BETTER UNDERSTANDING AND ADVICE THAN I GOT FROM JOSH'S STORY. What a frank, funny, brave young man he is.” -JOHN HOWARD, AUSTRALIAN ACTOR, GOLD LOGIE AWARD WINNER

"Funny, entertaining, well-written and above all - POWERFUL AND POIGNANT! Josh takes you on a whirlwind adventure through his life. I laughed and cried as I read the book." - LAURA MITCHELL

"Inspiring and brave - THE WRITING IS WITTY, BUT THE LESSON PACKS A POWERFUL PUNCH: that you are in charge of your story and it's never too late to find hope. This book can change your life. Read it." -A.F. HEALY

"Josh Rivedal's book is compelling and a necessary book for anyone who is struggling in life. THE GOSPEL ACCORDING TO JOSH SHOULD BE REQUIRED READING IN HIGH SCHOOLS -- they need to know that they are not alone and that they can get keep moving forward." -SHARON JOHNSON

"WHAT AN AMAZING READ! As a reader and teacher of English, I'm hard to impress, but it is clear that Rivedal is highly skilled in his craft. " -ZACHARY LICHTMANN