Lessons from the Road: What a Little Brown Bird Taught me about Winning 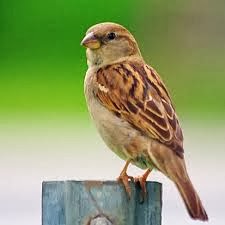 Before my flight to Austin last week, I was sitting inside the Jet Blue terminal at JFK  airport and a little brown bird flew and landed ten feet in front of me. The bird had spotted some kind of large nut lying on the ground that it wanted to eat.
The nut was too large for the bird to swallow much less grab with its beak, so it started pecking at the nut. The bird worked hard until the nut cracked into three pieces. But cracking the nut was not the bird’s main objective. The bird started biting at each piece of the nut until it was small enough to chew and swallow. It wasn’t easy biting at each piece of the nut. Smaller pieces were flying in different directions but the bird kept at it and finally ate the entire nut.
That bird was on a mission, a mission to complete his objective, a mission to win.
If that tiny little bird can find a way to win, so can I. But what does it mean to win in the grand scheme of things? What does it mean beyond a little brown bird inside an airport?
Winning is:
Winning above all is finding a way to lasso the word “impossible” from the heavens, bring it down to earth, tame it, and make it possible.