Why I’m Grateful for my Screwed up Childhood…

For my entire adolescence and through my early adulthood, I was angry and bitter about how my childhood played out. Why did I have to have a verbally and physically abusive father? Why couldn’t they have made more money and allowed me to play sports, or help with college, or do what “normal” kids’ parents do? Why did I have to have awful homemade haircuts (check out that stud in the little suit). 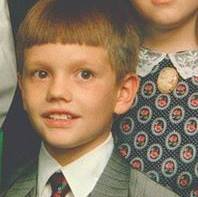 Why did they hold me down with oppressive and mentally damaging religiosity? Why did my father have to kill himself? Why me?

Things changed when at twenty-five I took a one-person show writing class with the venerable Matt Hoverman. I wrote a scene that I had to act out and play my own father. I wrote a piece where my father was cruel, insensitive, and probably came off as a giant d-bag. After I presented my scene to the class, Matt was kind and said the writing was good, but that I could never go up on stage and just “out the bastard.” If I were to write a successful scene, I would have to write something that showed a human side to my father, not just the evil things that I had been harping on for years. During that next week, I took a hard look at my father and who he was and what he went through. I didn’t agree with all the choices he made in life but some of them I could understand better. I had empathy for the man and I went back the following week and delivered a much better scene to the class (that eventually went on to become Kicking My Blue Genes in the Butt).

From Matt’s class I realized that I am not defined by my father, my dark past, or the circumstances that unexpectedly fell into my lap. But I could use those circumstances to change my world and the world of others for the better.

And I eventually did, using my father’s suicide as a catalyst to help others dealing with mental health issues and suicidal thinking or suicide loss.

The only way to deal with the enemy from our past, is to accept him as a friend and listen to the advice and lessons that he teaches us, but never allowing him to dictate the rules of the game.


Leave me a reply (it’ll be private)—I’d love to know how you are turning negatives into positives and how you’re kicking ass in your world. Thanks much!
Posted by Josh Rivedal