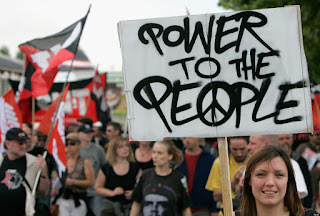 Rallies, protests, marches—all valid forms of communication and the exercise of free speech.

But what happens when the crowds die down?

Change and greatness is not up to these people—it’s up to you. After the protests, the angry dialogue at the kitchen table, the complaints around the water cooler; what are you actually going to do about it? Will you volunteer at the soup kitchen, work to understand the opposing viewpoint that seems preposterous, lead voter drives, build houses for the underemployed, hold the door for the old woman who can barely lift her arms?

Greatness and change are both choices and they’re not up to other people. When we demand change and greatness from within, we fight for what is right to us, we become empathetic, and we compromise if needed on the smaller things in order to work together with others to make our home, community, region, and world a better place.
Posted by Josh Rivedal No comments:

When a Rose Grows From the Cracks in a Broken Sidewalk

Today would have been my father’s 68th birthday. It’s a day that since 2009, the year he died, has brought conflicting and complimentary emotions of sadness, despair, hope, relief, joy, and empathy. If you know me, you know my father took his life in March 2009. Since that day, life has forever changed, there are days and minutes with pain but many more moments with gladness, hope, and healing. In early 2011, in tremendous emotional pain that outweighed my ability to cope; I nearly took my life as well. But thankfully, somehow, I found the capacity to get help.  I learned to cope, learned self-betterment, developed empathy, discovered how to heal, worked on skills that allowed me to duck, dodge, step around, and/or learn to roll with what life throws my way. I’ve come to the realization that I don’t need to make the depression that I live with daily an enemy but a friend, who I constantly need to speak to, cajole, manage, and babysit—and that’s okay. Complaining is wasted motion but coping with my “friend” allows me to move forward toward self-refinement. Most of all, I’ve learned a greater capacity to love and to be love; an ongoing process and something I never knew I’d be capable of; an all-encompassing river of love so wide and so deep. Thank you to first and foremost to Candace; and David, Kathleen, Brent, Marcia and the many others who have contributed to this understanding, and the knowledge that I have so much to learn in the space that is love.

Since 2011, I’ve spoken to, hugged, listened to, educated, and learned from tens of thousands of people across the US, Canada, England, and Australia—originally in the hopes that helping others would make me whole again. But these ongoing efforts—books, education, entertainment; all in the name of advocacy—they’ve made me bigger and more complete than I ever thought possible. I’ve been all over the world, I wrote books read by people in countries where English is a third language, I’ve literally saved lives and I don’t take that lightly, I’ve been able to take incredible vacations (sometimes sprinkled with this work), I’ve met incredible people, made friends with hundreds, and I’ve found the woman who I’ll spend the rest of my life with (yes, I’m married to a beautiful, talented, and amazing human being).

This was all possible not only because of my brain and my spirit but because of a support system so beautiful, so deep, and something beyond the best metaphors and analogies. I took a risk and asked for help in 2011, and many human safety nets fell into place for me. I’ve asked many to trust me and my message; and often they’ve said “yes,” and the people in their care have learned from me and yet I have been able to take away so much in return. Some would say I’m a self-made man, growing up poor in urban Trenton, NJ, without a certain kind of education, and statistically speaking I’m not supposed to be alive today. But I’m here because of me and because of you. It takes a village (mine might be a metropolis at this point ;) ).

But knowing that while I’m thriving and managing and coping and doing a decent job of moving through life and having adventures—there are many in the world like my father, like me, maybe like you, who are suffering in silence, maybe marginalized, and feeling completely and utterly alone. It’s for those people who I continue to speak for, advocate for, stand up for, and wave my flag—not just in suicide but the homeless trans-gender teen, the middle aged man with bipolar who won’t speak up and receive help for fear of losing his job, the refugee, the broken, the battered, and beaten. I can’t stop and won’t stop trying to help you tell your story, making you human to those who want to dehumanize you, even helping you realize that you are human when you dehumanize yourself (I’ve been there).

Today is a bittersweet day. If I could change the past and keep my father from dying, I would. But I can’t. Yet I know that as a result of his death, meaning and purpose have been found; and a once wilted flower is now a vibrant and healthy rose, growing from the cracks in a broken sidewalk.
Posted by Josh Rivedal No comments:

The Theory of (Self-) Evolution

When it’s not going well or as well as you’d like, it’s easy to spiral, to plan for the worst, to manifest failure, to make mole hills into mountains.

But it’s more difficult and must become a trained habit to instead think: what is going well, what can I be excited about, where and how can I evolve from this.

There’s a great deal we can’t control in this mad dash spinning around the sun—but we can control our thought life and how we readjust when obstacles arise.
Posted by Josh Rivedal No comments:

Empire Building and the Game of Life 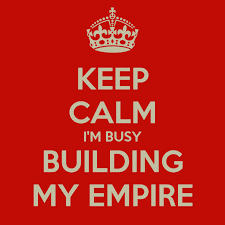 Life isn’t just a “game,” it’s the most impressive, scary, time-consuming, and challenging activity… ever. Virtual reality is easy—actual reality, not so much. Unfortunately (or fortunately, depending on how you choose to view it) the game of life involves both physical and emotional pain and many variables that can hold us back for extended periods of time.

This “game” of life is much like a role playing video game—Sims or Age of Empires—but on steroids.

The game becomes a bit more interesting when we think of it as just that—an open-ended “game” with endless possibilities, no extra lives, but thousands of little opportunities every day to build and grow our respective empires and ourselves closer to what we envision in our dreams.

Alexander the Great never got to China, Genghis Khan never got to Western Europe—but each kept pushing toward what they wanted and achieved (imperfect) greatness while on their path to following their dreams. You, too, can be labeled “Khan” or “The Great” within the boundaries of your own empire and beyond. But you have to keep playing the game.