What I learned in Hershey, Pennsylvania 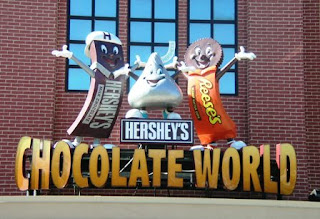 Last weekend I attended the APCA Northeast Conference in Hershey, Pennsylvania. I made a bunch of new friends and I’d like to introduce you to one of them.

I’d like you to meet Milton Hershey. He’s 28 years old. He loves candy and the process of candy-making. He has no high school education. He’s $150 in debt to his aunt and his father wants nothing to do with him. He’s broke. He has already started three businesses in his short life and failed each time.

What’s a Hershey to do?

He decided to learn. He picked himself up. He apprenticed. He observed. He brushed himself off. He tried again.

Hershey started pouring himself into a company he started called the Lancaster Caramel Company. Within a few years he found success. By the age of 43 he sold the Lancaster Caramel Company for 1 million dollars (in 1900). The next company he started was the Hershey Chocolate Company, where he used all of his previous failings and successes to create the iconic Hershey Milk Chocolate Bar and the Hershey Kiss.

Milton Hershey’s backstory is tremendously important because we tend to focus on the endpoint, the triumphant part of the story, the part where he owned a billion dollar chocolate company. But what about the path he took to get to success? We’d like to paint that path as a long straight line when it really is a long and winding zig-zagged path.